Wash Your Mouth Out

Campbell Works is delighted to welcome back Shaun Doyle & Mally Mallinson for their second solo show at the gallery. 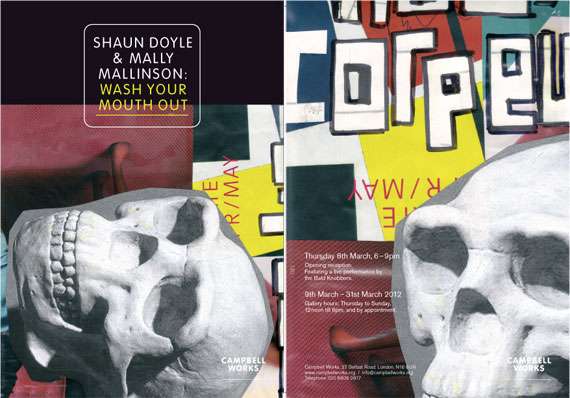 As schoolboys Doyle & Mallinson never swore at anyone. They just listened while their contemporaries were scolded by dinner ladies imploring them to rid their mouths of dirty words, in an attempt to implant the idea that a filthy tongue is synonymous with a degenerate mind. It had little effect, as grown up, Doyle and Mallinson take no prisoners.

In this new body of work Doyle & Mallinson identify two forms of insults, the kind that should never be tolerated and ones that are useful as they challenge the status quo. Accepting that some insults are never to be tolerated is however not to say that they should never be referred to. The philosopher George Santayana suggests that ‘those who forget the past are condemned to repeat it’. Take this further and ‘those who do not remember the past are doomed to misquote it.’

WASH YOUR MOUTH OUT will comprise several distinct works. Large collaged drawings with titles like ‘Our breakfasts are bigger than your breakfasts‘ and ‘Our shit smells better than your shit’ combine seemingly humorous remarks with imagery that points directly back at the viewer, questioning both our reading of these simplistic statements and the artists’ subversive intentions.

A sculpture ‘Our memories are better than your memories’ comprises a two-headed, Siamese twin sculpture of elephant skulls. Each half having been created separately from memory by the two artists and brought and bound together in the gallery. By challenging each other to a memory duel then unifying the results in a single action, Doyle and Mallinson ask, ‘is it more convincing when two people lend weight to wrongly held convictions?’

In a far corner, as if to light the very darkness of their ancestral antecedents, stands ‘Our skins are thicker than your skins’, comprising artisan lamps constructed from rawhide dog chews.

By fading from living memory, the actions of past generations can become distorted once consigned to the history books, so lest we forget and become completely bloated on junk culture, Doyle & Mallinson are here to save us. These works may not be easy to stomach, but a comic coating allows a deeper reflection on human conditioning and a reminder that we are all un-equals in a world where ‘My mum is better than yours’.

Doyle and Mallinson have worked collaboratively since 2004, working directly with political, social and historical issues. A characteristic of their work is the use of second-hand materials, salvaged and dislocated from their original sources so bringing with them their own history. Doyle and Mallinson explore the processes that take place after the initial digestion of material stimuli and track the course through that a form or idea takes after its initial use. This form of recycling is a means of distilling useful agents from elements approaching redundancy. The results are a stripped down, re-formed and re-packaged reality that challenge and celebrate the possibilities of extreme behaviour and belief.

Doyle and Mallinson live and work in London and Uttoxeter. They have exhibited internationally at institutions including Tate Britain, Rude Britannia; Institute of Contemporary Arts London, Autumn Exhibitionists and Galerie Clarke Montreal, Teenage Kicks. Solo shows include MOT London, Peristroma Dolorosa; Galerie Nostheide-Eycke, Germany, Return to the Black Forest Ghetto, and Venlo Stadhuis, NL Ecce Homo Erectus. Shortlisted for the Illy Prize at the Rotterdam Art Fair, 2009 and featured on The Culture Show in 2010 for their ‘Fascist Fruit Boys’ in Tate Britain’s Rude Britannia, their work, including earlier solo projects is included in numerous public and private collections including Saatchi and Odapark, NL. 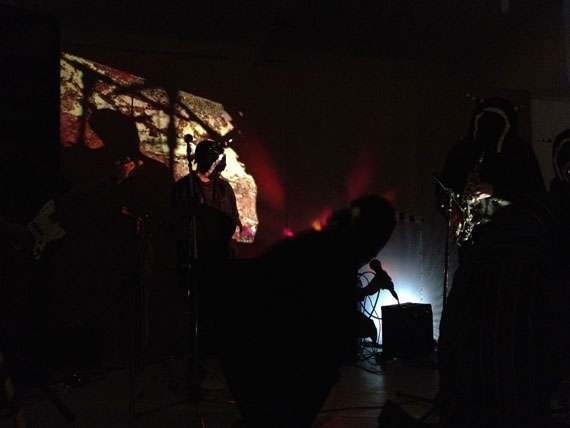