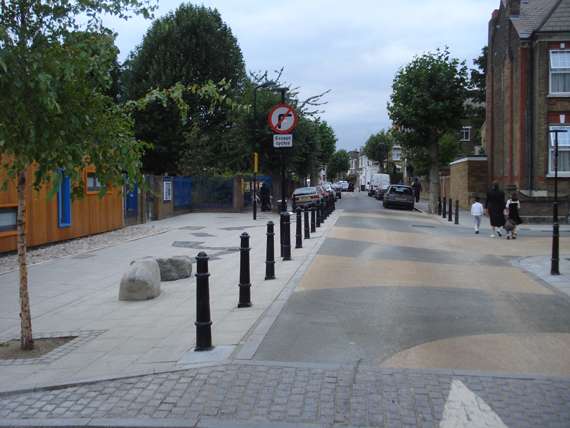 In an area as culturally diverse and ethnically mixed as the Cazenove Ward,  the creative aspects of the Windus Streets for People scheme have been and unique in providing an opportunity for generating ‘local shared ownership’ and community pride

Less a playground and more a walk through a storybook, the Windus Streets for People Project aims to reclaim the urban spaces existing between architecture to create new opportunities for play and leisure.

The project has been an ambitious scheme involving 2 artists, hundreds of residents, 4 contractors, the London borough of Hackney, Transport for London, and a steering group of 10 residents from Cazenove Area Action Group.

The aim was to create a new street environment for the residents of the Cazenove Ward in N16, Hackney. The area had been littered with rubbish, generally neglected and plagued by cars rat-running through the residential streets project was initially instigated by a residents group CAAG, with funding from TfL. Working with the LBHackney the area has been transformed by narrowing roads at strategic points, creating shared surfaces and building new paved spaces for play.

In the early stages, artists Neil Taylor and Harriet Murray from Campbell Works  inclusion of artwork within the project to encourage a pedestrian focus within the scheme.  This allowed opportunities to create social meeting places and child centred play areas in many locations, thereby shifting the focus and priority away from the car user. From the outset, Campbell Works adopted an approach that would enable local resident involvement in the creation of content for the artwork. The artists began by closing the roads, putting up a marquee and running art workshops for 250 local people, to generate images and ideas for the scheme. Through close discussions with the residents’ group, Campbell Works then project managed the planting of  30 trees, the sourcing and positioning of 36 large Scottish boulders, designing textured coloured () surfaces for 18 road junctions and the production of 117 amazing granite artworks and bespoke carved seating.

The Streets for People Project been made possible by the dedication of local residents and the support of both Transport for London, and the London Borough of Hackney.