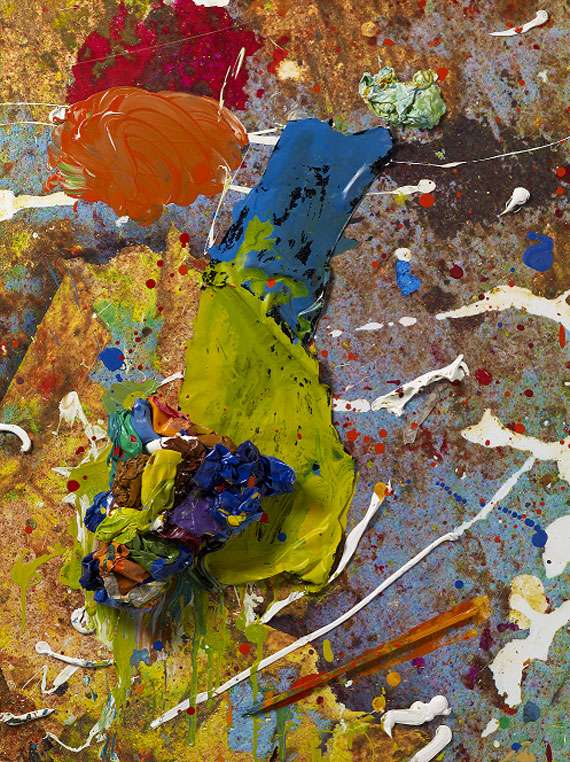 JAUS is very pleased to present “Land “, a group exhibition which forms part of Project LALO, a series of exhibitions organized by ARTRA (Los Angeles) and Campbell Works (London), and held in collaboration and exchange between spaces in London and L.A.

Images of the opening here:

Straight my eye hath caught new pleasures, Whilst the round it measures.’
From L’Allegro By John Milton

The term or had existed in Old English to describe a cleared patch of land, however, the word ‘landscape’ only first enters the English language around 1598 by translation from the Dutch, , and was a term used to describe artworks, and more specifically paintings of ‘the land’.
As a species migrating the continents, we survey the land with instruments when we measure and map it, and we survey the landscape through the lens in our eyes. We like to see how the ‘land lies’ in interpersonal situations and we easily inhabit metaphorical landscapes, and ever increasingly virtual ones, and when we refer to a city landscape (cityscape) we may imply a cultural mix of conurbation, diverse population, and the urban tapestry of material forms. The deviation of this once specific word into wider everyday use is interesting as it has placed us firmly in the picture, rather than standing before it, and while Milton’s couplet suggests that is a kind of measure, an area established by our attention to it (or by making a picture), it also reflects the evolution of our relationship with the world we inhabit.

Considering briefly two of the major traditions that form Western painting and Chinese art, we come across surviving Minoan Greek frescos (1500 BCE) of ‘pure landscapes’ with no figures, and the Illuminated manuscripts of Tres Riches Heures du Duc de Berry that were key in the development of the Western view of landscape art. In the East, the works from the Shan Shui tradition were never actually intended to represent actual locations. Being influenced by Daoism, these works were intended to evoke a spiritual response to the ‘idea’ of , something that only really becomes explicit in the west with and the decline of religious painting through the 18th and 19th centuries.

In Europe landscapes had been utilised for centuries as backdrops for portraits of wealthy landowners, most often idealized and painted in studios far from the actual locations presented. Later the ‘figure’ was employed merely as a device to populate the landscape and elevate the status of ‘pure landscape’ painting at times when portraiture and history painting were still considered higher art forms.

Then with the growth of ‘empire’ and the discoveries of ‘new worlds’ came a new challenge for art and for painting particular, to convey both the vastness of these new domains and the political dominance of ruling nations, while acting as national statements of the epic nature of the 19th century. Fast forward to the present, in our satellite world, an age with instant access to alternative views. Google Earth and military mapping tools allow us a ‘Gods’ eye view on proceedings below, fundamentally changing both our perception and relationship to the landscape. A perspective the land artists of the Nazca in Perú 400-650 AD had envisioned in the 7th century and one that the Australian Aborigines’ had long before King Charles I had even ridden his young stallion through Van Dyck’s rugged virtual space.

Photography and land Art have played their role too, and in recent years have again dominated the representation of the land, with epic projects by Gursky, Burtynsky and Salgado.

Leaping from the springboard of this narrative, “Land ” focuses on the work of six artists born in the UK, two currently living in Los Angeles and four from London, UK.

Presenting diverse perspectives in their relationships to ‘landscape’, the exhibited works form a conversation that explores whether the landscape has only ever been a mirror for portraying our vanity? The enormity of the earth and its diversity of textures, land formations and environments creates dumb creatures of us all, struck by wonder and the realization that we are so vulnerable, we are left only dreaming of a time when we stood so proudly in the foreground of the canvas, our absence now faded with the limelight being held by concepts and awe. Has there ever been a tradition of accurate documentation? Is this even possible or desirable when the more topographical accuracy a painting has achieved, the lower value it has tended to have as art?