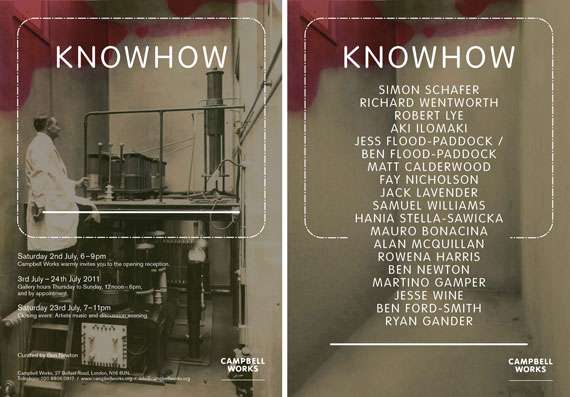 To acquire knowhow is to gain the practical skills or intelligence necessary to get something specific done. This is tacit knowledge in the sense that it can be withheld and kept confidential. It may also be difficult to transfer without practical instruction and the required cognitive faculty in the beholder. In the artist, this skill has traditionally revealed itself as a craft.

Since the dawn of the Readymade, craft in Art has continually been brought into question, and as a result, any preconception of a definitive Artistic Knowhow has been blurred or expanded to involve a myriad of scenarios or conditions.

Knowhow aims not necessarily to pin down a definition of the word but to ask the artists to delve into their own practice or maybe push themselves beyond their normal bounds of proficiency. This might manifest itself in a cathartic exploration of an unknown craft, an engagement with a ‘knowing’ failure or even through the use of prosthetic labour which utilises the employment of non-artistic intervention.

KNOWHOW will showcase new work by: