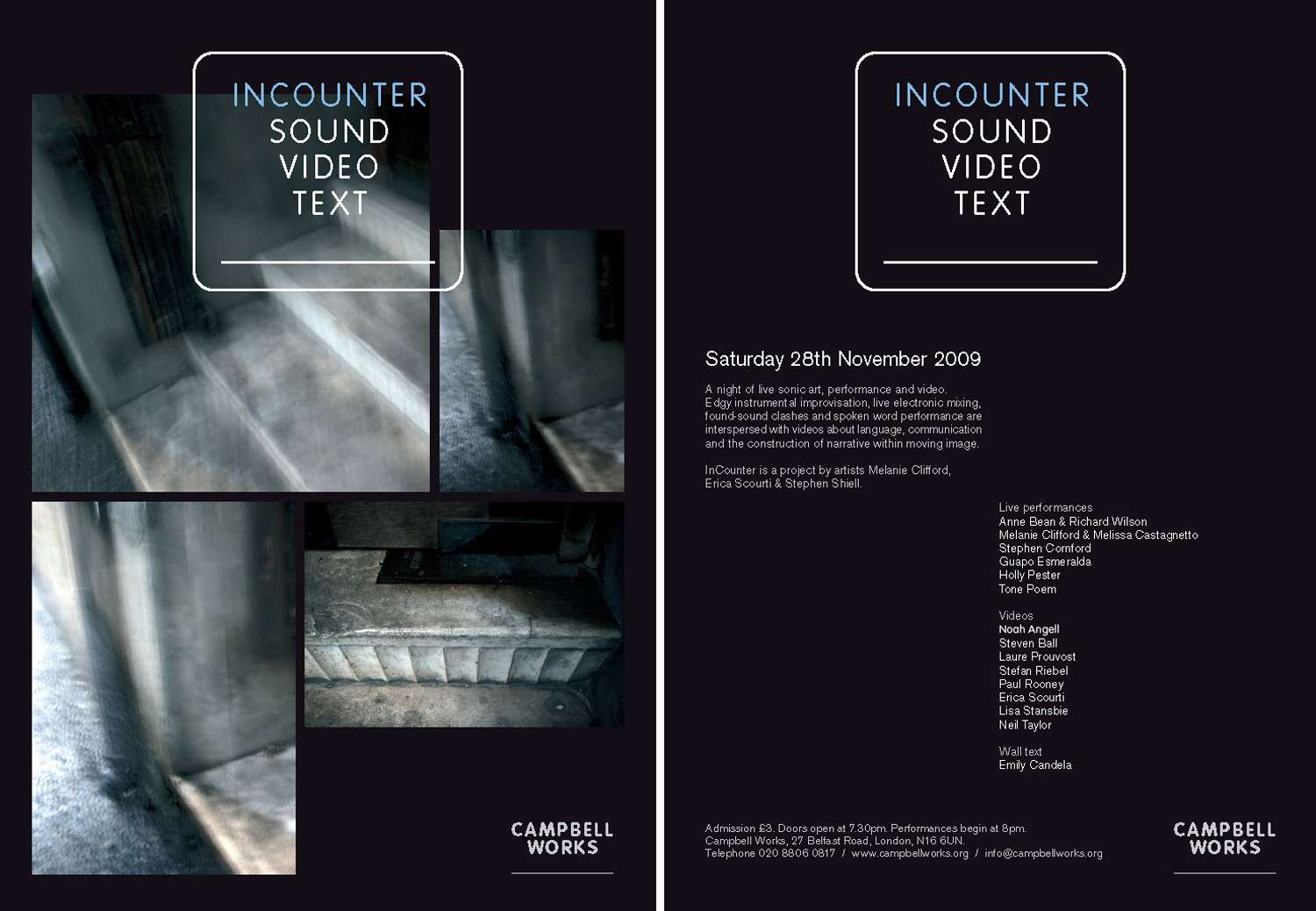 Anne and Richard have worked together on numerous performances since the seventies, particularly the Bow Gamelan Ensemble.  Here they will be working with Susie from the Mekons to improvise their way out of a nightmare.

Stephen is a sculptor working with music, sound and noise.  He has exhibited extensively across the UK and Europe including solo shows at Elevator Gallery (London) and Permanent Gallery (Brighton) and is currently a Research Fellow at the Sound Art Research Unit of Oxford Brookes.

Melissa is an artist and musician living and working in London since 1998.  As a drummer, she merges flow and fragility in her playing. She has performed at various international festivals including Internationale Kurzfilmtage Oberhausen, Whitechapel Art Gallery.

This trio is part of an ongoing engagement with liminal creative practices operating in the margin between sound art, contemporary improvisation, dance making, community-building and practice-based research.

She initiated research labs and projects and currently works on her PhD at University Roehampton. Mariella received the Danceweb Europe Scholarship and is part of international artists collective SweetandtenderCollaborations.

Werner works with sounds, beats and files in the context of audio culture, sonic and intermedia art in between conceptualisms, contemporary music, electroacoustic improvisation and electronica. Works, performances and collaborations with artists include Fennesz, Christoph Kurzmann, Gelatin and many more.

Holly Pester is an experimental sound poet and writer who recently performed as part of the Poetry Marathon at the Serpentine Gallery Her research at Birkbeck College in Transposition and Intermedia Poetry moves towards a poetics which is sited in between art disciplines; poetry and performance; sound poetry and new media art; composing and archiving.

Tone Poem performs live experimental sounds that are unplanned and improvised constructs of spontaneous associations between the artists. They have performed at Noise=Noise, Ill.FM live and other experimental music nights.

Noah was born in 1980 in the United States. Since graduating with a Master’s Degree in Fine Art from Central Saint Martin’s College of Art & Design in 2006, he has been living and working in London as a Filmmaker, Writer, and Lecturer.

Steven Ball has worked in film, video, sound and installation since the early 1980s. He currently lives in London where he is Research Fellow within the British Artists’ Film and Video Study Collection at Central Saint Martins and with Catherine Elwes recently devised Figuring Landscapes, screened at Tate Artsway.

Laure was born in Lille, France and now lives and works in London. Her films and videos are distributed by LUX and she is also director of tank.tv, the moving images online gallery. In 2009 she won the EAST International Award and presented a commission at the London Film Festival.

Stefan is an artist based in Leipzig, Germany. He is a tutor at the Academy of Visual Arts in has exhibited at galleries and festivals such as NGBK, Berlin, National Museum of Fine Arts, Kyrgyzstan “Urban Screens Melbourne 08”, and “Caszuidas Urban Screen Festival”, Amsterdam.

Paul has exhibited widely, with solo shows at Matt’s Gallery, London, and Collective Gallery, Edinburgh, residencies at Dundee Contemporary Arts; Tate Liverpool (MOMART Fellowship) and was the ACE Oxford-Melbourne Artist Fellow for 2004. Paul has shown in group projects at Tate Britain, London; Museo Reina Sofia, Madrid; the Shanghai Biennial and many more. He won the Northern Art Prize in 2009.

Erica is an artist and filmmaker with an interest in language, translation and cliché and their roles as conduits between the individual and collective. Her work has been at venues such as the Museo Reine Sofia, Kunstmuseum Bonn, Rencontres Internationales, Elevator Gallery, Exeter Phoenix and Bureau Gallery.

Lisa has undertaken residencies and shown across Europe and in the U.S at festivals including The Athens Video Art Festival 2007, Art Tech Media Festivals in Puerto de la Cruz, Tenerife and Cordoba, Spain,  Castlefield Gallery, Manchester, The Text Festival, Bury,  ‘‘ at AC Institute, New York  and a solo exhibition, ‘The Wings’ at Vyner Street Gallery, London.

Neil is an artist working in sculpture and film and is also joint director of Campbell Works with Harriet Murray. His practice extends to initiating and curating art projects within the Campbell Works framework and undertaking a wide range of public realm interventions. Recent projects at HWK, Berlin. Five Years, London. Campbell Works, London. For he will preview a trailer for a larger work in progress called Host.

Emily Candela completed an MA in Fine Art at Central Saint Martins College in 2006. Working in video, sculpture and collage, she exhibits internationally and is based in London. She also works in collaboration with Niall Sloane as NSEC.

A night of live sonic art, performance and video at Campbell Works. Edgy instrumental improvisation, live electronic mixing, found-sound clashes and spoken word performance are interspersed with videos about language, communication and the construction of narrative within moving image.