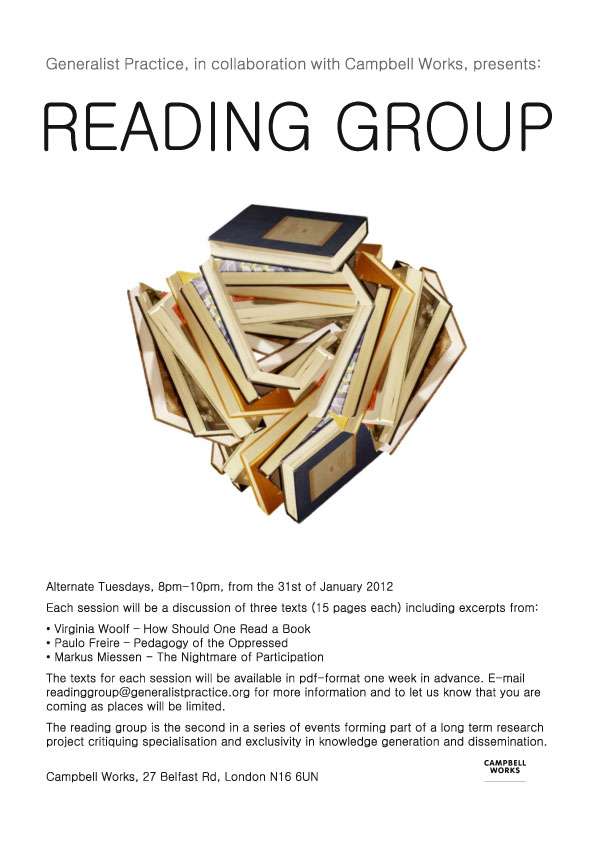 Following the success of last years Reading Group, Generalist Practice, in collaboration with Campbell Works, are pleased to present of the new season of the READING GROUP

READING GROUP – Being or becoming a Subject and the Subject’s ability to act.

• Markus Miessen – The Nightmare of Participation (Crossbench Praxis as a Mode of Criticality), Chapters 11 and 12

Non-Western artists have often been encouraged, historically, to maintain their sense of ‘otherness’ and ‘‘ by a privileged, Western establishment and discouraged from experimenting with broader artistic discourse. Is a generalist an outsider? Or is someone from a very particular perspective an outsider? The texts include an essay and article published recently and an interview with a veteran of the South African art scene, who was treated very much as an outsider on his sojourns in London.

The material  this time describes different paradigms of modernity – one writer has been influential to our understanding of modernism, another is credited with coining the term ‘postmodernism’ and the third text is an effort to describe what came after that:

• Walter Benjamin – On the Concept of History

• Fredric Jameson – Postmodernism or, the Cultural Logic of Late Capitalism (Section I and VI from Chapter I)