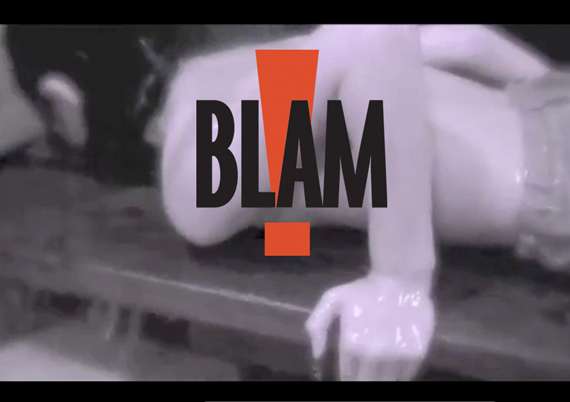 From Across the Pond and Underneath the Algae

Campbell Works and G George are delighted to present film and video works for From Across the Pond and Underneath the Algae, at Blam Projects, Los Angeles on the 21st August 2016

VLADIMIR MAISLIN (Mexico)  The appropriation of massive media images comes up to subvert their sense in a critique way.
Non-Stop Vacation  An inspiring web found of the and weird videos for this summer.

ARTEMIO NARRO (Mexico) Corny dark , cartoon collages and sarcastic shortcuts that us to reflect social clichés and conflicts of the human identity.
Sexonwheelzz  A tricky hot video.
Anonimo  A beautiful with friends having fun at the city park.
Apoohcalyze Now  An acid shortcut that explores the tragedy of war through the sad poetry founded on the human nature of Winnie Pooh.
The Lost Island  A cooperative short film made by local kids in a Mexican beach.

MARIA JOSÉ ALÓS (Mexico) Her videos inquiry into the construction of (self) identity, gender issues, and the process of rewriting/reimagining personal memories; fragmentary audiovisual structures that rely on a linear narrative.
XXX Found footage short film piece conceived through the articulation of appropriated and recycled film fragments to a unified sex scene composed different bodies, ambients and characters.
The History of Sadness A compilation of sad scenes remaking a narrative structure about human drama.
An animosity portrait.
Tomber en Amour A portrait of the ascent and descent of a structure and of the abolition of adjectives and verbs of the enunciation.

(Mexico) Video Artist. His work explores human sexuality and erotism by using preconceived images related to romanticism and the recent history of horror in cinema.
Aurora An overwhelming epilogue for a little princess.
Eau de toilette Not long time ago somebody dreamed she dreamed about Freddy.

WENDY LEÓN (Mexico) Her work deals with the abstract idea of self in context with her nearest reality.
A tragic shortcut.
A Body Portrait about the senses of the body.

ALÊ SOUTO (Brasil) The artist looks to free the idea of human existence poetic actions.
Suitcase to walk the world and capture constellations  An action to communicate by mirror reflections between a little island and the Oscar Niemeyer Museum in Rio de Janeiro.
Surfaces to reflect star´s dust and clear light How to collect stars to take them inside the museum.

DECOURCY ROBIN (France) Shortcuts made out from the documentation of dance, performance and body interventions on urban and countryside landscapes.
Moventic A little devil dances in the hill.
Near West – Trek Danse  A nonsense hike in the woods.
Chirologia Watch a hand go ahead. Take the Andean landscape as and musical score.
Harpia Portrait of an unreachable lady.

JOSÉ ANTONIO CORDERO (Mexico) Independent Actor and Filmmaker
En la Condesa  One of the greatest underground video hits of the Mexican Queer . Created by the artist Jose Antonio Cordero, the funniest parody of the pretentious and fancy in Mexico City.

MARTIN DORDONI IUSO (Argentina) Writer and storyteller.
The house that was never at home Technically, the most simple but funniest shortcut animation about a guy that was in love with his house.

MARCO LEGACY (Germany) His work deals with the exploration of the other the parody and of exotism. He creates bizarre histories and characters in order to understand of cultural and political conventions.
A sign on the road said: Take us to Madre Marco Schmitt woke up this morning and got himself a line of speed. He is on a crazy Madre road trip. He is driving to reach Madre.
The sky over the Otomí Ceremonial Center at Temoaya in Mexico. The camera pans down to show a massive outdoor stone structure and the shaman Raúl Trejo. An aerial shot reveals that the shaman is seated in of a mosaic representation of the Ouroboros, the snake which bites its own tail, thus elevating itself from finite line to infinite circle. Through a spiritual ritual, Trejo calls a flying drone into presence. It arrives from the sun and dives toward the Ouroboros.
Xterminating Badges The conflict between freedom and security underlies Marco Schmitt’s film. Schmitt’s template was Luis Buñuel’s surreal masterpiece El ángel (The Exterminating Angel, 1962), where rich and influential guests at a dinner party feel themselves, to be trapped in a room. The macabre metaphor from Franco-era Spain is not lost in present-day Zurich, where the police museum, bristling with confiscated weapons, is the claustrophobic setting for the drama. The police officers who took part in Schmitt’s method acting workshops can , however, to enjoy the comic release from their professional personae. How is the freedom of the police?
Independent Independence Documentation of a performance in the streets of Mexico-City. Schmitt converged the aesthetics of the revolution and vehicles, which are all over Mexico-City bothering people with its constantly throbbing megaphone slogans.

The Kellies (Elyse Reardon-Jung & Ichiro Irie)
Music of some sort from this dynamic new duo… Immediately after Settlers+Nomads (Starting at 8:00 PM)

From Across the Pond and Underneath the Algae
Video Screenings and Performance Documentations from Britain (with a couple of American made videos thrown in at the end).
Campbell Works, curated by Kate Tindle/’G George’ from London
Anna Pickles Harvey, Breath (2016)
Peter Martin, We take our Holidays in Spain (2015) Neil Taylor, HOST (2009)
Liadain Evans, Bad Packing (2015)
Harriet Murray, Anomaly Island (2011)

All over the place
DG14 Collective
Three years in one studio (DG14) have brought four artists together: Two Brits, one Pole and a Russian all graduating from Art School. The unstable atmosphere in Britain mirrors the insecure future of these graduates. Our Collective faces disruption- how do we continue to develop our work and discussion across changing ?
This body of work reflects desires to return home, mixed with the frustration of having to leave and the impact it has on our collective.
The ramifications of Brexit and the rising disillusionment in current politics feel like a step backwards, resulting in a unifying sense of futility present in all the works selected

The Shirt Off My Back
Artists Brett Van Ort, Stephanie Sabo and Julia Paull discuss different aspects of water pollution as experienced through current projects on EPA water clean up sites, the fashion Industry, and critically endangered amphibians respectively. Organized by Julia Paull