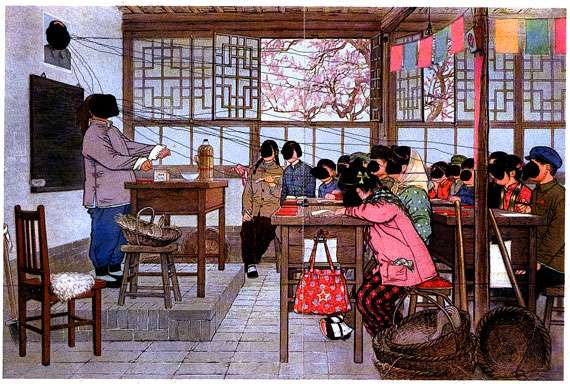 Each Teach is a project first developed in 2006, by Neil Taylor & Harriet Murray, that invites 36 artists to each a subject of their choice for 1 hour in rotation over 6 days within a gallery context. Taking the premise that many artists are passionate and knowledgeable about subjects outside their practice that may inform, but could equally be completely tangential to their work.

At the invitation of Five Years gallery, Campbell Works presents Each Teach pilot, an experimental version of the original framework, creating a series of micro lessons over one day at Five Years gallery on the 3rd May 2009.

The only requirement is that the artists are available to teach, present, share or perform their subject for 30 minutes with a gallery audience. The subject can be anything they choose, but would ideally contain a participatory component, and the method of delivery be up to them. What interests Taylor & Murray about the Each Teach project, is that by stretching the artists’ disciplines and examining the way they interpret the brief as an artwork, the audience is able to learn about the more private skills and paradigm worlds the artists inhabit.

A practical session on dowsing, the art of finding hidden
things – water, energy, buried treasure – with a sideways look at belief and intuition

In a participatory workshop, the artist will demonstrate how to prepare, build and light a fire using no matches.

I will speak on related topics that were discussed in a talk that I recently went to that accompanied a screening of an artists film. I did not see the film.
I was sent the script before the screening was due by some weeks but also failed to read any of it. When I arrived, the talk was just about to get underway. I sat, in a circle of grouped chairs for an hour or so, and listened to the people gathered in the room discuss the film and other related topics. I will be talking about some of the topics that were generated from this group discussion. I would like this to the experience of watching a film that you really enjoyed, and then returning to the book that the script and screenplay were developed from, only to find that the book is terrible. Another option becomes available at this point – the book that should have been written that produced the wonderful screenplay and script, that is now apparent in the film. I am of course not making any value judgement about the film I didn’t see, it sounds great. But by not having seen the film, or reading the script, another option is made available, and I will be talking about these still-evolving possibilities. I am interested in what became possible as a result of my absence from this experience.

An introduction to the finer art of avoidance. Neil Taylor & Harriet Murray hope to explore underlying motivations and physiological preferences for the avoider. This short talk will endeavour to include key skills acquisition for the observant and an in-depth study into a variety of approaches.

Mobile session of giving instructions to a puppet teacher. The puppet teacher will teach audience hypnotic exercise of mapping images from the verbal description of the landscape, natural life and social interaction in the countryside of UK. This session will be arranged over a phone as to demonstrate Chinese whispers – someone is whispering in the one’s ear and then to the audience. This session is to explore the notion of brainwashing, manipulation and control as well as the boundary of real and imaginary.

Mally and I are planning a video lesson for Each Teach – ‘Piltdown as in man.

Taking the idea of the mixtape, (a collection of favourite music tracks), the Each Teach session will take the form of an illustrated lecture featuring readings (tracks) from my own and others writings based around notions of ‘escape’. How to escape? Music? Film? Drawing? Stories? The Wild? Can these things form a basis for ‘transendence’ from ‘every day’ life? Each ‘track’/reading will be linked like you would a mixtape and each accompanied by a slide or projected image.

To accompany the lecture I may produce a publication (mixtape) which will document my chosen texts. Readings may include excerpts from Thoreau, Kafka, Proust, perhaps some song lyrics as well as my own texts. Essayist Geoffrey O’Brien has called the personal mixtape “the most widely practised American art form”, and many mixtape enthusiasts believe that by carefully selecting and ordering the tracks in a mix, an artistic statement can be created that is greater than the sum of its individual songs… From an aesthetic point of view, many enthusiasts believe that because a tape player, unlike a CD player, lacks the ability to skip from song to song, the mixtape needs to be considered in its entirety. This requires the mixtape creator to consider the transitions between songs, the effects caused by juxtaposing a soft song with a loud song, and the overall “narrative arc” of the entire tape.

Shane and Patrick propose to read from the A section of Chambers Encyclopedia circa 1958 while making Pizza and Cocktails.

We would like to do a lesson on the Unspectacular, relating ideas of ‘stuff’ that is overlooked or designed to disappear…considering how this possible, if at all and what we can gain from it in a culture. Using us as a working model it will investigate the use of dialogue and pass it from one another.

Miyuki will teach the assembled how to make an Origami Peace Crane in Giant-Size. She will demonstrate this using a giant sheet of then use it to make a traditional origami crane. The final crane will be over 4 foot long. This demonstration will be conducted entirely in Japanese with Calum attempting to give a translation and helping with the demonstration. At the beginning of the session, the audience will be encouraged to write their wishes for peace on the blank paper that Miyuki is going to fold. They are welcome to use their own languages so there are many different languages. The audience will also be given pieces of paper to make cranes themselves. They can also write their wishes on the paper that they will be given to fold. At the end of the session, we will go onto the balcony and launch the giant crane off the balcony so that it can fly across London (or somewhere down below). Visitors are encouraged to launch their cranes off the balcony (as it is on the sixth floor) too.

Japanese legend states that if you fold 1000 cranes then a wish will be granted on you. So participants are encouraged to make their silent wishes while launching it off. The making of 1000 cranes became internationally known as a symbol of peace through those made by a Japanese girl Sadako Sasaki who died in 1955 of Leukemia. This disease was contracted as a result of the Hiroshima bomb in 1945. So launching them with wishes off the balcony could represent a bombing raid or something much more hopeful.”