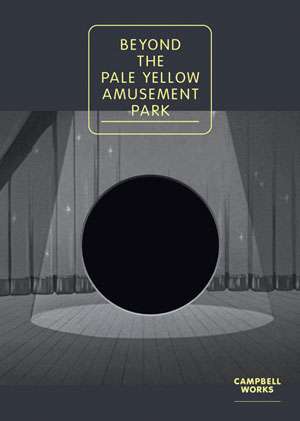 Beyond the Pale Yellow Amusement Park

Beyond the Pale… is a four-week group exhibition of objects, installation, photography and video. The exhibits relate to past and future performance works or actions, alluding to the presence of the performer. Now, stripped of their initial purpose and exhibited in a gallery context, the work gains a new presence and a more intimate relationship with the audience beyond the mediation of the performance artist. As a counterpoint, the exhibition will present a selection of these artefacts within their primary context in ‘The Yellow Amusement Park’, a preformative evening of artist video, film and music.

A pale is a stake or pointed piece of wood and is associated with paling a fence. Owing to this, the term pale came to mean the area that is enclosed and safe. So, to be beyond the pale is to be outside the area accepted as ‘home’. Pales were enforced in many European countries from as early as 1360 as a political tool to restrict trade between tribal and cultural groups – some then being allowed to live, as a concession, beyond the pale. This exhibition emphasises alternate aspects of enactment, moving beyond a romantic spectacle of performance to propose an alter-life for these exhibits.