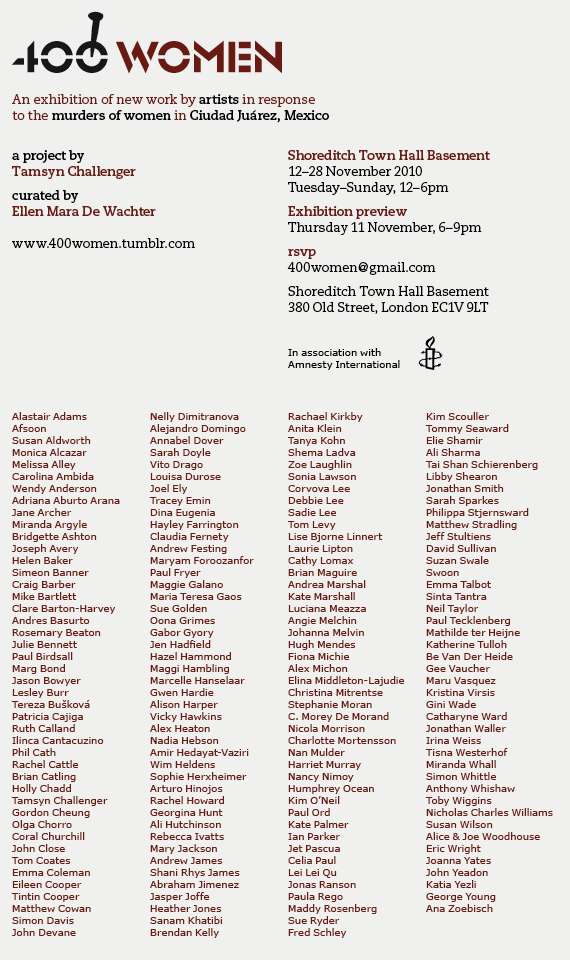 400 Women is a project conceived by artist Tamsyn Challenger in response to the brutal murder and rape of more than 400 women over a decade in the US border town of Ciudad Juárez and the region of Chihuahua in Mexico. Some 200 exceptional artists have each painted one of the murdered women, confronting us with and safeguarding in our memory the dead and disappeared. The exhibition raises important questions about the capacity of art to represent tragedy and commemorate the dead, as well as the potential for art to affect an audience and the collective nature of grief. The exhibition is curated by Ellen Mara De Wachter, a curator and writer based in London.

“This project began in 2005 when I was commissioned to make a feature for BBC Radio 4’s Woman’s Hour. I travelled to Mexico and met with some of the families and was struck by their need to hand me postcards that had been generated as another aid to finding their loved ones. These images were black, white and pink and poorly produced but they started the concept in my mind and on the long flight home I had a half-formed idea for what has become the project 400 Women. The concept relies heavily on a large-scale collaboration and, for me, each participating artist represents one of the murdered women, in some way invoking her, so that she can challenge humanity. Each image produced will stand as a statement against gender violence.”

Explanations for the murders, which continue to this day, from serial killers to organ fielding, the use of women as prizes for drug cartels and domestic violence. Most sinister of all is the possibility of so-called sexual violence tourism. The continued disappearance of women in Mexico and elsewhere in Latin America evidences a culture’s disregard for the rights of women. Despite media coverage of the issue, the murder of 186 Women in 2009 and the disappearance of many more attest to the fact that little is changing. The killers continue to enjoy impunity in the region, which has had a knock-on effect throughout the country and the region. Amnesty International has reported that in Guatemala more than 2,200 women have been murdered since 2001. The Mexican authorities have seriously mishandled each investigation into these murders and in August 2006 the Mexican federal government dropped its investigations into the murders, concluding that no federal laws had been violated.

The majority of the murdered women were extremely poor. Challenger has obtained over 100 images through Amnesty International’s Mexican team, the group Nuestra Hijas de Regreso a Casa, and the Casa Amiga Rape Crisis centre in Ciudad Juárez. For some women no image is extant. In these cases, the artist involved will use the woman’s name as they wish within the piece.